The Foreign Terrorist Organization (FTO) label is a powerful tool used by the US; it is as a form of hostage-taking in a political sense, says Brian Becker, national coordinator at the Answer Coalition.

The leader of the Lebanese political party and militant group, Hezbollah, has revealed that Washington offered to remove it from the terrorism watch-list and give the group financial aid if it dropped its resistance to Israel.

“Following the 2000 victory, the Israeli enemy, along with the US, had realized that Lebanons real power lies within its resistance, which has managed to force the Israeli occupation out of Lebanon without any condition,” Sayyed Hassan Nasrallah said on Sunday, as cited by Irans Press TV. “We were offered money and to be part of the authority in Lebanon on condition that we cede resistance,” he continued, adding that it was his fault at that time that he “didnt accept to take his paper, so that it would be a proof now.”

According to Nasrallah, the offer was made by former vice-president Dick Cheney via US-Lebanese businessman George Nader.

RT asked Brian Becker how he could comment on what – according to Nasrallah – was the US attempt to “bribe” Hezbollah.

“I think the report from the Lebanese resistance Hezbollah leadership is extremely instructive and revealing. The designation by the US government of an organization or a country as a foreign terrorist organization (FTO) is a form of hostage-taking in a political sense,” he said.

“When the US makes that designation, which is largely for political purposes, it puts the entity that has been designated into a terrible position: no one can do business with it, they cant trade with it, it is persona non grata diplomatically, its leaders could be arrested and sent to the International Criminal Court in The Hague. And then the US can say But, if you do what we want you to do or for some other political purpose we choose to lift this designation, then you are no longer subject to all of these economic, social and even criminal penalties. It is really just a weapon, it is a tool, it is an instrument, a blunt tool used by the US diplomacy. It shows that is not very diplomatic,” Becker explained. 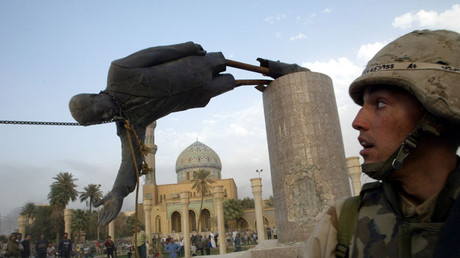 For the US government to designate another country or organization as a foreign terrorist organization is an immensely powerful instrument, yet, its purely political. “It is a form of bullying on a grand scale,” Becker explained.

“It doesnt really say anything about terrorism or about the people who are sanctioned under the FTO label,” Becker told RT. “The label doesnt really correspond or correlate to reality, it is purely a political exercise.”

Often entities that has been designated as foreign terrorist organizations by the US are “the governments that seek to be independent from the US or have challenged US hegemony in their area or in their country,” the analyst said. At the same time, he noted, some of the terrorist organizations like the MEK (Mujahedin-e Khalq Organization), “in the case of Iraq, as long as they are fighting Iran, then the US says It is ok, they are fighting our enemies."

“So, even though they have an FTO label, it is not really applied. They have a sort of immunity from application. It is completely discreet or discretionary on the part of the US powerful government about how it should be used and who it should be used against,” Becker said.

Year in review: The biggest stories from Sweden in 2018